When common complaints are being brought up, often the subject will be PMS or how hormonal women are. General western society is aware that womens' instability comes from hormones and hormonal changes each month, but not very many people know any more than that about those hormones. Why not? Why does it have to be some mystical unknown? Well that bugged me enough to start reading about hormones, etc, and to try to get a bit of education on the topic. After all, knowledge is power! It has been immensely satisfying to begin to understand the workings of my body, and bodies in general. Here is a list of the four basic hormones which are at work in a woman's body each month:

The following chart is a simplistic way to understand a woman's cycle. Up until ovulation, FSH, LH and estrogen are at work, preparing the egg to ovulate. After ovulation, progesterone is at work to create the right environment should that egg be fertilized:

Here are 2 charts of the four hormone levels: 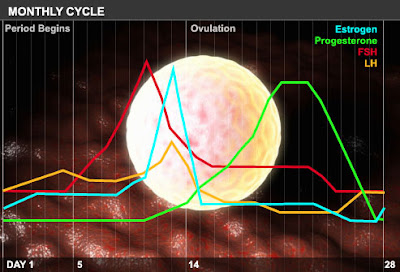 (I think this one is funny. Though I'm fairly certain it is supposed to be an egg, it looks like a full moon--connected in some cultures with the mysteries of women's emotional instability. .)