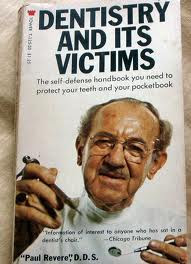 Remember all those childrens' books you read as a kid helping you understand that going to the Dentist isn't scary?
Classic Example: http://youtu.be/mNNEqPvy1QA
Well they were wrong and going to the Dentist IS SCARY! Well, walking in is ok... it's what happens and the walking out part that is really the kicker. I think kids have every reason in the world to be scared of the Dentist.
I went to the Dentist today, they told me I needed a filling. So I go in knowing I'm there for a filling, assuming they know I'm there for a filling, but nothing was said except "Have a seat," and "Open wide for me." Out of the corner of my eye I see this enormous needle coming at me, no warning, no pep talk before hand to make sure I'm calm and ready, no explanations. Just "open wide" and incoming needle! Yikes! Well I mentally gave myself the much needed pep talk to "relax, take a breath, un-tense your muscles..." Luckily they had to wait a few minutes for the numbing to take effect so I asked a few questions about the procedure. Don't think they would have said another word if I hadn't gotten them talking... eventually the left side of my mouth became numb and they began drilling... (here's where I close my eyes and try to morph myself out of this dental chair until the procedure is over).
So in general my body (my head, mostly) endured some intense pressure (I'm serious here, he was pushing really hard into my jaw/skull!), along with intense localized trauma to the mouth, gums, inner cheek, and teeth. It is not a normal occurance to send 4-inch long needles into the gums, for instance, or to be drilled into like bolts into a steel building.
When they were done the dentist told me to swish and then left. The dental-hygienist motioned toward the sink for me to swish, and said that I could get up. Maybe what she meant was that I was allowed to get up, but the actual ability part... She made it sound so normal, no problem, so I stood up like no big deal and immediately was hit with a wave of dizziness, my legs went limp and my vision blurred just a bit. I leaned on the counter to steady myself, and my legs began shaking. I tried to swish whatever was in the little cup but it mostly poured out of the left side of my mouth that I now realized was also hanging limp. What a sight I must have been! Nobody else seemed phased though. I continued to shake and thought about mentioning that I was going into shock, but the dental-hygienist didn't seem to notice anything was wrong and was walking away, after having mentioned that I could leave. I slowly made my way down the hall to the front desk and looked in the bathroom mirror to see my limp-hanging face. All the sudden I had infinite compassion for stroke-survivors who have lost control of one side of their face, whose mouth and eye leak and who have that half-frown, half normal mouth. I about freaked out, but at least that part was to be expected.
At the front desk I don't remember much. My mind was pretty fuzzy, focusing mostly on remaining standing on my shaking legs. I do remember wondering if anyone else goes into shock from getting fillings and how I should be treating the symptoms. The only thing that came to mind was from Lifeguarding: lie down and wrap the victim in a blanket.
I focused my fuzzy thoughts, more just instincts now, on getting to the car. (I realized later that I had NO idea what the paper said that I signed my name on... they could have billed me a million dollars for all I knew.) Once in the car I tried to calm down, take deep breaths to calm my shaking legs and clear my fuzzy brain. I called my husband to try to explain the indecency I had just gone through and the shock I was suffering from it, but, getting a filling is a normal thing to do, right? What's all the fuss about?
He was kind, and I tried to laugh it off, but driving home I began leaking all the tension, stress and physical trauma out my eyes. The downpour didn't let up for quite a while and my legs are still shaking slightly as I type this, just after getting home. Physical and emotional exhaustion are setting in and bed sounds like the safest and most divine place in the world.
Who says going to the Dentist isn't scarey?!
Posted by Marzipan at 4:29 PM