On the Job Hunt

I am a hairstylist by trade. So I move to Canada, get it in my head to work as a hairstylist here, and go about trying to find a job. This job hunt turned out VERY different from the one my civil-engineer spouse experienced. It took about 3 days. His took about 5 months. Well they are different trades, for sure, but I just thought the whole thing interesting enough to warrant a blog-post.

I typed up my resume for Hairstyling, printed out a dozen copies, and set aside an afternoon to scour the neighborhood salons, handing out my resume everywhere they might be hiring. 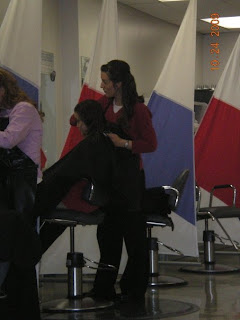 I am a bit of a special case, however. Because I was awarded my license in the USA, I have a bit of a process before I can get it in Canada, including being an apprentice for a year. Well usually when people hear 'apprentice' they think: cheap labor. I had no desire to settle for being cheap labor, but I also didn't know what good pay is, so I sort of just hoped people would give me a good deal. chuckle.

After handing out the resumes, calls began coming in the next day. By the end of that day I had two or three interviews scheduled.

Thursday, 4:30pm. Mall salon.
I met the couple who run the salon and sat down for an interview with them. Well I absolutely loved them. Italian couple, very fun; upbeat about the salon and how busy it is. They offered me $10/hour or 47% commission, committed me to not discuss wages with any of the other stylists (which made me wonder if they were ripping me off or the other stylists [and minimum wage is 9.50 in Canada, so this wasn't a great offer), and offered for me to start work on Saturday. A plus: there was a francophone lady and two Chinese-speaking ladies working there, all of which I had conversations with in their respective language and was feeling like this would be a match made in heaven of a job. The downsides: Mall hours are horrible. Every other Sunday at least, and they are open EVERY holiday.

Friday, noon, another mall salon-- phone interview.
The manager is from Figi this time (cool!), and she was all business. "You'd work maybe one Sunday a month, two nights a week besides your regular days, and pay is good. $12/hour or 50% commission, but everybody makes commission b/c our shop is so busy." And she'd work with all my requests for vacation time. Also open Mall hours, meaning all holidays. yuk.

Friday, 5pm, private salon.
The manager is from I don't know where, my best guess is the Middle East somewhere. He had somewhat broken English and was a man of few words. I was a bit worn out from the pressures of wanting to work lots of hours but not Sundays, and earlier that day I had listened to a devotional which was all about getting a job that works for you: allowing you to serve the Lord. Ok, ok, I get it, I won't take a job that makes me work on Sundays. sigh.

This salon was only offering me part time, but I wasn't too worried about that. The main thing is that they're not open on Sundays, right? Well he offered me $12/hour or 55% commission, and said that I probably wouldn't make commission right away, needing to build up my clientele. Well, ok. I said I'd take the job and he said, vaguely, that he'd call me sometime Monday... not many details out of that man, or any formalities or paperwork. (?)  I felt a bit odd about the situation during the interview, like perhaps there was something creepy about this guy, but it was the first place offering me no Sundays and the pay was as good as or higher than elsewhere, so, that's what the heavens were trying to tell me to do, right??

Earlier- Private Salon:
I first went to a salon offering booth rent. $60/day - per day you work there. Everyone that works there has their own clientele, so it works great for them. He offered to cut me a bit of a break on the booth rent for the first 8 months or so, while I built up my clientele, but we both acknowledged that it'd be a pretty difficult stretch.  Darn it! If I just had a great clientele already that'd be ideal! but I don't.