Singing in Choirs
My spouse and I were asked to join a small choir singing a French Christmas carol, and it was fun to spend the hours practicing together as a couple and with the choir. We performed at a Stake Christmas Concert, and we all wore red scarves to make it a bit more 'frenchy'. :) I also sang in a double quartet, which was a pleasure. All of the memebers were excellent musicians, which made it so much fun. I love feeling like a bit of a band-nerd again and 'getting' the corny music jokes and lingo.

Surprise!
One evening my honey came home from work and said he had a surprise for me, fishing something out of his pocket.  Tickets... I looked closer... SYMPHONY tickets! He was going to take me to the Symphony! Ohh I was so excited about that! (That seemed like something only rich people do). (Maybe it is, we got them for free). It wasn't until a few days later that he told me the tickets were for Handel's Messiah. Oh man it just kept getting better! Handel's Messiah at the Symphony. I was in heaven.
When we arrived it was fun to people-watch and see how everyone treated it. It used to be that going to the Symphony was a very formal occasion, and some people still dressed up in formal attire, which was lovely to see. But there were a few jeans and turtlenecks, and much in between...
It took a little while to really get into the music for me, but by intermission I was floating on clouds- my soul singing along with them.  It was beautiful. I missed there being a brass section, though, as it was only a wind-orchestra (plus one trumpet for the trumpet piece). When the trumpet began playing, I knew what had been missing for me during that first half. No brass! I guess I really am a brass-instrument kind of girl. I love the feeling of brass music. Thanks honey for taking me to the Symphony!

Work Party
Our first work-Christmas-party together was quite the do. It was a formal; cocktails and dancing. I went formal-dress hunting a few weeks earlier, and was able to score a beautiful red-sparkly mermaid style dress, with a white and gold-trimmed bolero to go with. Guess where I found this amazing outfit?? The local thrift store. I love finding amazing things like that at thrift stores. 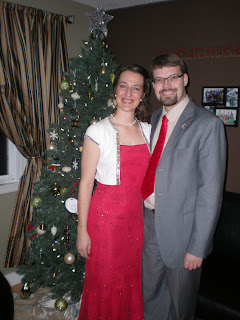 The work party was a lot of fun. I had already met a few of my spouse's co-workers at the summer BBQ, so it was fun to catch up and get to know them better. The dinner was wonderful, and the dessert table exciting (They had a Bouche-de-Noel!). We chatted with those at our table and then there was dancing!! We rocked the floor with some crazy cha-cha and lots of swing. It is so fun that both of us enjoy dancing.

Fondu
We had friends over for fondue one evening, and we went all out on this dinner party. Bubbly 'champagne' in the Christmas goblets we've been using all month, shrimp and cocktail sauce, and lots of delicious veggies and meat for the fondue, which lasted about 2 hours. We played board games and generally enjoyed the evening.

Eggnog Party and others...
One of my love's friends has an Eggnog Party every year at Christmas time, and we were in town to go this year. This was my first occasion trying homemade eggnog. Not bad, though I can't say it is my favorite beverage. It's a fun tradition anyhow! We also went to another friend's Christmas party that was a big get together of soup, snacks, family, and my honey's old friends. I met some neat people with some really amazing stories (Escaping a massacred African village with 5 village children, the only survivors; meeting their love online and moving to New Zealand...). And the lovely hostess took our picture before we headed to the work Christmas party. Thanks!

Korean Chinese Dinner
The tutoring company I work for had a Christmas dinner too. The man running the company is Korean, and basically all the students are Korean, and basically all the tutors are...something else. We ate at a Chinese restaurant, which was delicious of course! Lets see if I can remember the ethnicities of the other tutors who attended: Guyanan, Philippino , White, White, Chinese, Franco-Albertan. It was an interesting group, most of us had traveled to various parts of the world and were sub-experts on various subjects such as subways in Asian countries, North Korea, Japan's non-immigration policies and honesty culture, Europe vs Asia, and getting ripped off in a foreign country (especially if you look like a native). It was a really enjoyable dinner conversation! Sometimes I have a hard time connecting to people, but this was a breeze. It helped to remind me that there isn't something wrong with me (I've been struggling to find/make friends, lol), I just need to find people with similar interests.

December is Awesome!  It is super crazy, but that's because everyone is in a good mood and wants to spend time together. I think it is fantastic, and I reminded myself over and over again this month that it isn't stressful busy, it is enjoyable busy. Enjoy December madness. And besides everything goes more or less back to normal once January hits. (except for the looming tax-job...)

I hope everyone enjoys their own versions of December Delights, and feel the joy of the season in spite of the business. Merry Christmas!