My 'Purpose' in Life

The last few months have been a very real inner search for me, as I have tried to define my purpose, my mission in my new life. Always before I had a goal, a game plan, a course to follow, something to work towards the completion of. Now schooling and internships are over and my search has been for something new to replace that. 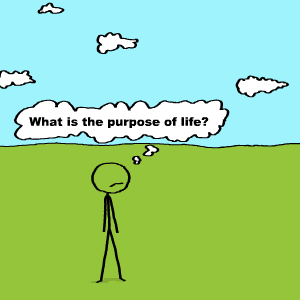 Is it work?
More schooling?
Something else?

But it is pretty hard to define your purpose/mission for the next 50 years-- life is always changing!

I eventually came to the realization that I was looking too far, totally missing my mark. The big things I have always dreamed of having, I now have! Right in front of me everyday! The most important part of which is my dear husband. He is my dream come true. Living with, being married to, taking care of and loving this man is a dream come true. I guess I needed to realize that life doesn't always have to be a chase, sometimes it is best spent enjoying and bettering what you already have.

I read a book yesterday titled "Man's Search for Meaning," by Viktor E. Frankl, a German doctor who lived through the concentration camps of WWII. Some of his philosophies reinforced my conclusion, and helped me gain a more insightful outlook on my purpose in this life.

In the context of finding meaning in life, he says this:

"The Latin word finis has two meanings: the end or the finish, and a goal to reach. A man who could not see the end of his "provisional existence" was not able to aim at an ultimate goal in life. He ceased living for the future... The unemployed worker, for example, is in a similar position. His existence has become provisional and in a certain sense he cannot live for the future or aim a a goal." p70

"I consider it a dangerous misconception of mental hygiene to assume that what man needs in the first place is equilibrium or, as it is called in biology, "homeostasis," i.e., a tensionless state. What man actually needs is not a tensionless state but rather the striving and struggling for a worthwhile goal, a freely chosen task...the call of a potential meaning waiting to be fulfilled by him." p105


1. Having goals and striving to achieve them give life purpose.

"The true meaning of life is discovered in the world, rather than within man, as though it were a closed system. ...by giving himself to a cause to serve or another person to love... that love is the ultimate and the highest goal to which man can aspire... The salvation of man is through love and in love." p37.  I love that he came to this conclusion, because it is the same conclusion I have come to on my own.


2. Having a beloved, and actively loving that person, gives a life ultimate purpose and meaning.

This last principle is an important one to me, it helped me gain a much clearer perspective on the goals and missions we strive to accomplish in life, and that there is not one overarching goal I need to know RIGHT NOW for the rest of my life (other than loving my beloved).

3. "Thus far we have shown that the meaning of life always changes, but that it never ceases to be." p.111

One other thing Frankl brought out in his conclusions is something I have had as a life goal since my teenage years: To live with no regrets. He puts it a but more poetically, speaking of an old man who has lived his life 'meaningfully': "Has he any reason to envy the young people whom he sees, or wax nostalgic over his own lost youth? What reasons has he to envy a young person: or the possibilities that a young person has, the future which is in store for him? 'No, thank you,' he will think. 'Instead of possibilities, I have realities in my past, not only the reality of work done and love loved, but of suffering bravely suffered.' Having been, is the surest kind of being." p121
Posted by Marzipan at 1:05 PM