What a great place!
Saint George is where the Higher Laws event took place. Although we were in class from 8am-9pm Monday to Friday, we had Saturday to sight see in Saint George: 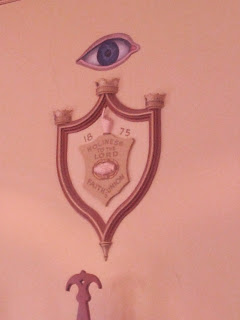 Posted by Marzipan at 9:09 AM No comments:

Mr. M and I attended what I can only term a 'self-help' course. Maybe a better name would be 'finishing school.' It was all about successful relationships and communicating with people in ways that would be uplifting and motivating rather than demeaning and unkind, as communications often tend to go...
I wanted to attend this course because I saw it as a great parenting course. I made a commitment to myself when I was a teenager that I would take parenting courses. Being a better person, spouse, and parent every day means a lot to me.
Some of my favorite lessons from the course are: The forgiveness program. I feel like I have a way to teach my children to say sorry that they can feel good about. (I have been working for several years to overcome my fear of saying sorry).  Also the lesson about Human Needs, and that our actions are the vehicles of those needs. If we have an action that is not good, we can switch up the vehicle and still meet the need. Other highlights are having a family code word, 10 second speed limit (for people who talk too much), managing our state, the hierarchy of relationships, and the Unity triad. Using the word "I" instead of something else when speaking is also an important lesson that was reinforced here. It makes my own my story, and take ownership of my emotions.

A major Ah-ha moment for me was when we were talking about the Hierarchy of relationships:
1. God/Universe
2. Self - State
3. Spouse
4. Children
5. Family
6. Others
Brandon put State next to Self, and I realized that if I'm in a bad place emotionally, physically, or mentally, I need to pull in and address me before the others down the chain. Ultimately, doing so will be beneficial to everyone. (Less snapping, anger, and general misery). I've learned this principle before, to take time for myself so I can help other people better, but it just made way more practical sense the way he presented it. And now anger/frustration/snapping will be a trigger for me to take a time out and remember this principle.

It was a great conference!
Posted by Marzipan at 9:07 AM No comments:

As my baby has grown and become a little person the last few months, I've been having flashbacks to when my younger siblings were this age. I don't specifically remember the age, but the actions - her expressions, what she does with her hands, and her vocalizations.

As her mother, she still seems like an infant.

But in my memories of siblings at this age, I remember feeling like I was communicating with them and understanding their communication quite clearly, on a more equal level intellectually. I'm not sure if it was because I was not as far removed from childhood myself, or what. I'll have some experience with my baby and it'll trigger a memory of a similar experience with my youngest siblings, and it is so interesting to remember how my interactions with my siblings put them on an older level than what I associate with my baby. So I'm making a mental effort to see her as a person who has just as cohesive thoughts and reactions to her experiences in mortality as I do, she just doesn't have the words for them yet.

A couple years ago I experienced watching this kind of relationship with a good friend who lived in the basement, and her daughter. This friend treated her child the same as she would treat me, in situations where her daughter was unhappy, hurt, or having a ball. That was so refreshing!

I think sometimes the baby culture goes a bit too far. I don't know where a good balance is, but I'm striving to find it.

On a similar note, I often still chant to myself, "I will be patient, I will be gentle, I will be kind." Babies are people too, and should be treated as such! I have made a goal to tame my temper. I have no desire to allow myself to 'fly off the handle', or blow up. There are healthier ways of dealing with frustration, and just because I know "other moms yell", is absolutely no excuse for me. (I'm sure I'll need to re-read this in a few years :D).
Posted by Marzipan at 9:02 AM No comments:

For the eternal purposes of the Lord shall roll on, until all his promises shall be fulfilled.
(Book of Mormon | Mormon 8:22‎)‎

What a great, eternal perspective! God has a plan, and it is unrolling, always moving forward. Sit back and observe an Omnipotent Being at work. :)
Posted by Marzipan at 9:00 AM No comments:

Mr. M recently read the entire Harry Potter series in a matter of two weeks. :D That gave me the opportunity to go to the library, and you know those display shelves of featured books? I always look at them but rarely see books that peak my interest. This time I struck gold- twice! Two books that have been a better read than I've had in a long time. The first is titled "Queen Hereafter," and is a historical fiction about Queen Margaret of Scotland, contemporary of William the Conqueror.Queen Margaret wanted to be a nun. She was an incredibly pious woman. The author did a beautiful job of depicting her sincerity and honest devotion to God. She not only prayed every morning, she took all her ladies of the court with her to the chapel to pray every morning. She fasted often - to the point of being unhealthy - but I admire her belief in and adherence to this principle. She thought often of repentance and forgiveness, and though her 'repentance prayers' were memorized recitations, I admire how she kept the bettering of herself at the top of her list of important things to do.  She kept an eternal perspective in a way that is not socially acceptable today, talking to the Scottish clergy about their differences from Rome and how their people wouldn't make it to heaven if they didn't change their ways, and pray in Latin, etc. Her heart was in the right place. And she built her life around her piety. The book was about much more than her religious life, but this is the part that spoke to my soul. "Saint Margaret" has inspired me, has given me a vision of what such piety might look like. And she gave me a precious gift --Every Sunday when I partake of the bread and water in remembrance of the Atonement of my Savior, I make a commitment for the week and review the one from the past week. Something to work on, to do better at, or to focus on. I have several times made "kneeling prayers" my commitment. "Remember to pray!" We are taught this from infancy. "Pray with sincerity!" we are often reminded. Despite my logical desires to do so, I am guilty of repetitious, absent-minded prayers.  A tiny twinge of guilt before gratefully burying my head in the pillow. As I read "Queen Hereafter," (what a fitting title), I was inspired. I can't say just what changed, in my heart, but Margaret was a beautiful example to me, and I learn by example - when I have something I can copy or recreate in my own life.Margaret prayed for an hour each morning. I don't think an hour is reasonable or necessary or attainable, lol, but I do know that my prayers could be a bit longer. I have heard before that one should praise God, thank God, and supplicate God, in that order. Well I began trying out the "Praise God" part of my prayers. It was a bit awkward at first, I felt embarrassed for some reason. But what a neat experience!! To praise God and name some of his many glorious names, describing him and his deeds and relationship to man, the earth, the universe. It feels good, and important, somehow. It elevates my thought plane.Thank you Queen Margaret. I hope to keep this new-found sincerity for a long time.

Psalm 40
I waited patiently for the Lord; and he inclined unto me, and heard my cry.
He brought me up also out of an horrible pit, out of the miry clay, and set my feet upon a rock, and established my goings.
And he hath put a new song in my mouth, even praise unto our God: many shall see it, and respect, and shall trust in the Lord.
Blessed is that man that maketh the Lord his trust, and respecteth not the proud, nor such as turn aside to lies.
Many, O Lord my God, are thy wonderful works which thou hast done, and thy thoughts which are to us-ward: they cannot be reckoned up in order unto thee: if I would declare and speak of them, they are more than can be numbered.
Then said I, Lo, I come: in the volume of the book it is written of me,
I delight to do thy will, O my God: yea, thy law is within my heart.
Posted by Marzipan at 8:59 AM 1 comment: